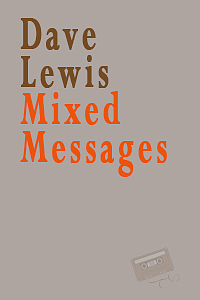 “This new collection’s voices are wonderfully varied, powerful and haunting. Divided into three sections, Lewis touches on a number of diverse themes; anti-racism, Africa and austerity, to name just a few, before finally leading us back to the all-encompassing wrapper of the natural world.

The poems will provide an uncomfortable social document for some readers but will become an anchor of a particular time and place for others. There is such maturity here that sometimes we feel that the poet is only brushing lightly across the surface and could, if he wanted to, tell us so much more.

Lewis offers us detailed observation, confession and brutal honesty in equal measure. Once again, here is a well-thought out cultural statement about this crazy world we all inhabit.” – Mark Davies

‘Stay down,’
our mammy growled,
as the fat man
smelling of Coca Cola
waddled into view.
His shirt straining
against a kopje of a belly
while sweat hung on the air
mapping out a clear path
like a wounded elephant.
His Tilley hat and scarf
incongruous like a radio collar
as he fuses to the contours
of thoughtless hate.

Suddenly out of left field
the real killer springs,
rifle hanging as if by a single
hair of a horses tail.
We crouched lower,
becoming the yellow grass,
miss a lungful of oxygen
as two loud bangs
silence the crickets
for a brief second,
before running
and laughing
and flashes of light
from a small box.

That was a long time ago.
When we were torn
from her warm bosom,
given plastic milk bottles
and cold zebra steak.
Now we are sheltered,
caged from harm
until it becomes our turn
to run free one last time.
My brother says Androcles
was just some fairy tale
that mothers told their children
to help them sleep
safe and sound at night.

I have to believe he’s wrong.

Published as a paperback and e-book in July 2021 by Publish & Print.