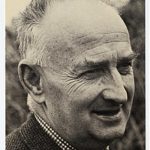 Waldo Williams (1904 – 1971, W) was born in Haverfordwest, Pembrokeshire and was one of the leading Welsh-language poets of the 20th century. He was also a notable Christian pacifist, anti-war campaigner, and Welsh nationalist.  He studied at the University College of Wales, Aberystwyth, where he graduated in English in 1926. He then trained as a teacher and worked in various schools Wales and England.  A pacifist, he was a conscientious objector in WWII, leading to his dismissal from a headmastership.  During the Korean War (1950–1953) he refused to pay his income tax on pacifist grounds, as a protest against the war and forced military conscription – a protest which he continued until compulsory military service ended in 1963, and all the men conscripted had been released.  He was twice imprisoned as a result of his refusal to pay income tax.  His greatest work, ‘Dail Pren’ (The Leaves of the Tree), was published in 1956.