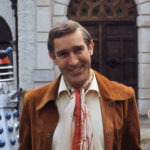 Terence Joseph Nation (1930 – 1997) was a television writer and novelist. He made his name as a comedy writer before becoming a prolific writer for drama, working on many of the most popular British series of the 1960s and 1970s. He made a significant contribution to the long-running BBC science-fiction series Doctor Who from its outset, creating the villainous Daleks which established its early popularity and later devising the recurring character of Davros. Nation was also the creator of two cult BBC series, Survivors and Blake’s 7.  He also wrote episodes of The Saint, The Avengers, The Persuaders and many more TV series.