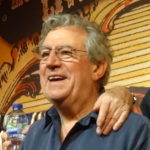 Terry Jones (1942 – 2020, E) was an actor, writer, comedian, screenwriter, film director and historian, best known as a member of the Monty Python comedy troupe. Born in the seaside town of Colwyn Bay. He read history at Oxford University and wrote (with Michael Palin) for British comedy programmes Do Not Adjust Your Set and The Frost Report, before creating Monty Python’s Flying Circus with Cambridge graduates Eric Idle, John Cleese, Graham Chapman and Terry Gilliam. He made his directorial debut with the team’s first film, Monty Python and the Holy Grail, which he co-directed with Gilliam, and also directed Life of Brian and The Meaning of Life. After Python, Jones’ co-wrote Ripping Yarns, with Palin. He is a well-respected Medieval historian, having written several books and presented television documentaries about the period, as well as a prolific children’s book author.