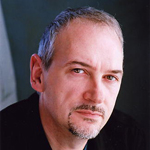 Stephen Knight (1960, E) was born in Swansea and is a poet, novelist, theatre director and tutor in creative writing. He studied English at Oxford University (Jesus College) and theatre directing at the Bristol Old Vic Theatre School. His first book of poems was Flowering Limbs (1993). He received an Eric Gregory Award in 1987 and won the National Poetry Competition in 1992. He has also won the 2003 TLS/ Blackwells Poetry Competition for ‘The Long Way Home’. His writing deals with disappointment and decay, albeit with a lightness of touch.