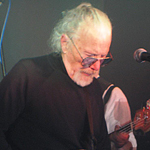 Roger ‘Deke’ Leonard (1944 – 2017) was born in Llanelli. A Welsh rock musician and a member of the progressive rock bands Man and Iceberg. He was also an author, raconteur and television panelist. His stage name is from “Deke” Rivers, the character played by Elvis Presley in his second film Loving You. Leonard started his writing career with sleeve notes for the 1970s Man albums. After Man disbanded he wrote articles and reviews for Vox, Studio Week and other music magazines. His first autobiographical book Rhinos, Winos & Lunatics (1996) had limited sales, but his second book Maybe I Should’ve Stayed in Bed? (2000) received good reviews. Leonard read extracts from the books for a series of BBC radio programmes It’s Crazy Man which won ‘Best Radio Documentary’ at the 2006 Celtic Film and Television Festival. He has regularly appeared at the Dylan Thomas Literary Weekend in Laugharne.