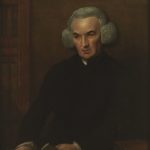 Richard Price (1723 – 1791) was a moral philosopher, nonconformist preacher and mathematician. Born in Llangeinor, Glamorgan Price spent most of his adult life as minister of Newington Green Unitarian Church, on the outskirts of London. He also wrote on issues of demography and finance, and was a Fellow of the Royal Society. Mary Wollstonecraft moved her fledgling school for girls to Newington Green in 1784, and attended Price’s services, where believers of all kinds were welcomed. Price is believed to have helped her with money to go to Lisbon to see her close friend Fanny Blood. The ideas Wollstonecraft ingested from the sermons at Newington Green pushed her towards a political awakening. The support Price gave to the colonies of British North America made him famous. In early 1776 he published Observations on the Nature of Civil Liberty, the Principles of Government, and the Justice and Policy of the War with America. Sixty thousand copies of this pamphlet were sold within days; and a cheap edition was issued which sold twice as many copies. Price rapidly became one of the best known men in England. He was presented with the freedom of the city of London, and it is said that his pamphlet had a part in determining the Americans to declare their independence.