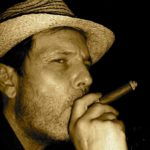 Richard Gwyn (born 1956) is a novelist, essayist and poet. He grew up in Crickhowell, Powys, the son of a country doctor and a nurse. He left the university without a degree and began to travel extensively across Europe, living for long spells in Greece and Spain, working on fishing boats and as an agricultural labourer. Following a period of vagrancy and serious illness, he returned to Wales, where he studied linguistics and completed a PhD in the semiotics of illness. His experiences of travel catalysed his interest in writing, and he published three collections of poetry and prose poems. Since 2013 he has been Professor of Creative and Critical Writing at Cardiff University. He also translates poetry and short fiction from Spanish and since 2005 has regularly reviewed books for The Independent. His memoir The Vagabond’s Breakfast, published in 2011, has been called an “astonishing memoir of alcoholism, illness and redemption describing, in language of the utmost control, what it feels like to lose control of one’s life.