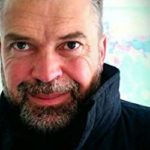 Rhys Hughes (1966, E), is from Cardiff and is a fantasy writer and essayist. Although he is not a member of OuLiPo, the international literary group that uses mathematics and logic to create texts that break the familiar patterns of ‘normal’ writing, he is one of the few English-speaking practitioners of these methods. Some of his more experimental works can be considered examples of ergodic literature. His long novel ‘Engelbrecht Again!’ is a sequel to Maurice Richardson’s 1950 cult classic ‘The Exploits of Engelbrecht’ and is the most radical of Hughes’s books, making extensive use of lipograms, typographical tricks, coded passages and other OuLiPo techniques. His main project consists of authoring a 1,000-story cycle of both tightly and loosely interconnected tales.