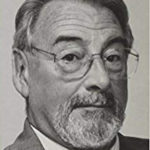 Raymond Garlick (1926 – 2011, E) was born in London but grew up in Gwynedd, and was educated in Llandudno at the John Bright County School. He studied English literature at Bangor University and worked as a teacher at Bangor, Pembroke Dock and Blaenau Ffestiniog. In 1949 he became a co-founder of the review, ‘Dock Leaves’ (from 1958 renamed The Anglo-Welsh Review) and from 1949 to 1960 was its first editor. He also began broadcasting for the BBC and his first books of poems – ‘Poems from the Mountain House’ was published in 1950. In 1967 he lectured a Welsh Studies course, at Trinity College, Carmarthen and introduced his students to the works of David Jones, Idris Davies, Glyn Jones, Alun Lewis, Dylan Thomas, R. S. Thomas, John Ormond and Leslie Norris. His own poetry was influenced by the writings of Roy Campbell, and of R. S. Thomas and John Cowper Powys. In the 1970s he and his family took part in non-violent campaigning for the use of Welsh-language road signs in Wales, and at one point his wife and son were arrested. Garlick was a lifelong pacifist.