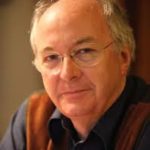 Philip Pullman (1946, E) was born in Norwich but most of his formative years were spent in Llanbedr, Ardudwy, North Wales. He is the author of several best-selling books, including the fantasy trilogy His Dark Materials. In 2008, The Times named Pullman one of the “50 greatest British writers since 1945”. In a 2004 poll for the BBC, Pullman was named the eleventh most influential person in British culture. The first book of Pullman’s His Dark Materials trilogy, Northern Lights, won the 1995 Carnegie Medal from the Library Association and was adapted as a film under the book’s US title, The Golden Compass. He has a strong commitment to traditional British civil liberties and is noted for his criticism of growing state authority and government encroachment into everyday life. In October 2011, Pullman backed a campaign to stop 600 library closures in England calling it a “war against stupidity”.