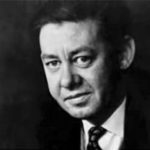 Peter Bryan George (1924 – 1966, E) was born in Treorchy and is famous for the 1958 Cold War thriller novel ‘Red Alert’, published initially with the title ‘Two Hours To Doom’ and written using the pseudonym Peter Bryant. The book was the inspiration for Stanley Kubrick’s classic movie ‘Dr. Strangelove’.  He was a flight lieutenant and navigator for the Royal Air Force during World War II serving with No. 255 Squadron RAF, flying night fighter missions over Malta and Italy.  Peter George received a co-writing credit for the film’s screenplay with Kubrick and Terry Southern, but was dissatisfied with the comedic element Kubrick applied to the material. As a co-writer, he shared a ‘Best Adapted Screenplay’ Oscar nomination. George’s final completed novel, ‘Commander-1’, envisaged a post-apocalyptic world in which a group of survivors is tyrannized by a dictator. On 1 June 1966, Peter George was found dead with a discharged double-barreled shotgun between his knees; his death was ruled a suicide.