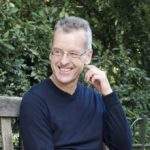 Oliver Reynolds (1957) was born in Cardiff and studied at the University of Hull before returning to Wales to work for Theatre Wales. He won the Arvon Foundation International Poetry Competition in 1985 for his poem ‘Rorschach Writing’ and the Eric Gregory Award in 1986. Reynolds has held writing residencies at universities in England, Scotland and Sweden, and has contributed to various literary publications including The Times Literary Supplement, Granta and The London Magazine.