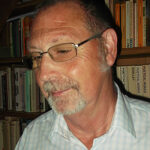 Mick Evans grew up in rural Hertfordshire. He read English at Oxford, where he gained a Violet Vaughan Morgan Prize. He pursued a career in teaching in Kent, Cheshire, and finally Carmarthenshire. The move to Wales was prompted by the desire to re-establish the family’s Welsh roots. Surrounded by landscapes steeped in myth and the dramatic scenery of the Black Mountains and Towy Valley, the tensions of urban and natural worlds are a constant source of inspiration. A founder member of the Dinefwr Poets group, he is published in a number of anthologies, a runner up in the Cinnamon single poem competition, and winner of the Welsh Poetry Competition. His debut collection, Burlesque, was published by Cinnamon Press in 2019. He performs at spoken word events in Carmarthen, and read selections from his work at the Llandeilo Literary Festival.