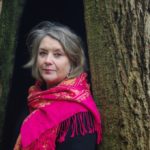 Menna Elfyn (born 1952) is a poet, playwright, columnist, and editor, writing in Welsh. Elfyn has published ten volumes of poetry and a dozen more of children’s books and anthologies. She has also written eight plays for the stage, six radio plays for the BBC, and two plays and several documentaries for television. She co-edited The Bloodaxe Book of Modern Welsh Poetry.