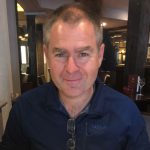 Mark Lewis (1973, E) is originally from Cardiff but now lives in Cilfynydd.  He writes both fiction and non-fiction.  He is a proficient skipper, diver, mountaineer, trainer and author.  For over thirty years he has worked in and around the extreme expedition arena, either in the mountains or at sea.  In 1997 he was the first Welsh man and the youngest person in the world to summit Mt Vinson in Antarctica.  With all the adventures that life has given him, he has written about them in factual books, and used them to develop his creativity with several fiction books.  In addition, he is co-author of a children’s series of books under the banner of ‘The Adventures of Joshua’.