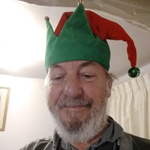 Lloyd Rees (1949, E) was born in London and educated in Sussex and Swansea, where he has lived most of his life.  He was a secondary school teacher, then went on to become Head of English at Swansea Metropolitan University, where he introduced a Creative Writing course.  He retired in 2014.  His first book Don’t Stand So Close was shortlisted for the BBC Wales Book of the Year in 1993.  A second novel The Show-Me State was published by Seren in 1995.  There followed four volumes of poetry then a composite novel Voices Without Parts and another volume of poetry The Two of Us.  His latest book is the satirical thriller The Mondegreen Affair.  He has been shortlisted for the Bridport Prize for poetry and the short story and has had poems and stories published in a wide range of literary magazines, including, amongst other periodicals, Poetry Wales, The New Welsh Review Dreich, South and Cambrensis.