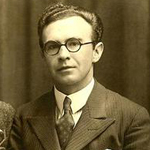 John Gwyn Griffiths (1911 – 2004, EW) was a poet, Egyptologist and nationalist political activist born in Porth before reading Latin at University College, Cardiff where he gained a first class degree in 1932. He then graduated with a first class degree in Greek in 1933. Between 1936 and 1937 he was an archaeological assistant with the Egyptian Exploration Society at Sesebi, Lower Nubia. Griffiths’ writing was influenced by the European avant-garde movement, especially that of Dadaist Kurt Schwitters. Griffiths, along with his wife, set up a writing and intellectual circle in the Rhondda for like-minded thinkers – the Cadwgan Circle (Cylch Cadwgan). In 1946 he began editing the Welsh Magazine, Y Fflam (The Flame) with Euros Bowen and from 1948 until 1952 edited Plaid Cymru’s newspaper Y Ddraig Goch. He is better known in Wales for his poetry, of which he published four collections of texts, all in the Welsh language.