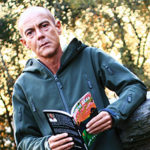 John Evans (born 1960) is a Welsh writer, filmmaker, and environmental activist. He started his career with punk band The Tax Exiles and recorded a single, ‘Sister Soul’, under the name John Marlon. Part of the New Wave of Welsh writing his books include Industria, G.B.H., The Acid Real, and a novel, Giants. Evans often writes about his native south Wales Valleys: How Real Is My Valley? – Postmodernism & the South Wales Valleys, and the natural history works, The Red Kite in Wales, and Goshawk. In 1998, he was nominated for, and won, a Whitbread Award in recognition of outstanding service to the community. In 2010, he created Save The Badger (an umbrella organisation which included the RSPCA, Badger Trust, and Welsh Wildlife Trust) and became spokesman alongside several high profile celebrities, including Queen’s guitarist Brian May, which resulted in the badger cull being stopped in Wales. In 2013 he founded Raptor Watch, an organisation to conserve and protect birds of prey in South Wales.