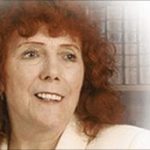 Iris Davies (1935 – 2010), pen name Iris Gower, was a novelist, noted for her many historical romances, most of which are set in the seaport of Swansea and the adjacent Gower Peninsula, from which she took her pseudonym. She worked as a nursery teacher, took other part-time jobs and began writing in her twenties. Her first novel, Tudor Tapestry, was published in 1974, but it was the success of her novel, Copper Kingdom (1983) that put her on world’s bestseller lists. It was one of many of her novels set in the copper, pottery and other industries of Swansea or in the rural life of Gower. Altogether she wrote about 40 published books, including 26 novels. She was always interested in fostering the work of other writers, became a patron of the Year of Literature in Swansea, and at the Swansea Writers’ Circle welcomed and encouraged the novelist Catrin Collier.