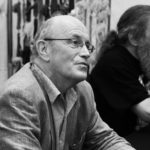 Iain Sinclair (1943, E), was born in Cardiff, and is a writer and filmmaker basing much of his work around London. His early work was mostly poetry, much of it published by his own small press, Albion Village Press. He was (and remains) closely connected with the British avant garde poetry scene of the 1960s and 1970s – authors such as Edward Dorn, J. H. Prynne, Douglas Oliver, Peter Ackroyd and Brian Catling are often quoted in his work and even turn up in fictionalized form as characters.  Sinclair was for some time perhaps best known for the novel Downriver (1991), which won the James Tait Black Memorial Prize and the 1992 Encore Award. It envisages the UK under the rule of the Widow, a grotesque version of Margaret Thatcher as viewed by her harshest critics, who supposedly establishes a one party state in a fifth term.