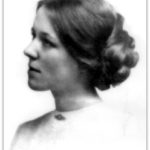 Hilda Campbell Vaughan (1892 – 1985) was born in Builth Wells.  She was a novelist and short story writer publishing ten, critically acclaimed and varied novels, set mostly in her native Radnorshire, concern rural communities and heroines.  Her first was ‘The Battle to the Weak’ (1925) and her last ‘The Candle and the Light’ (1954).  She was a descendant of the 17th-century poet Henry Vaughan.  She was educated at home until the outbreak of the First World War in 1914, after which she served in a Red Cross hospital and for the Women’s Land Army in Breconshire and Radnorshire. Her work brought her into contact with women living on the local farms, and would become an influence on her writing.  In 1963 she was elected a fellow of the Royal Society of Literature.