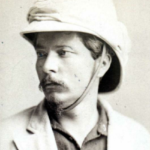 Sir Henry Morton Stanley (born John Rowlands) (1841 – 1904) was a journalist and explorer from Denbigh. Abandoned by his mother he was abused in a workhouse for the poor until he fled to New Orleans aged eighteen. He fought in the American Civil War (on both sides), served in the US Navy and then became a journalist. He was imprisoned after an ill-fated expedition to the Ottoman Empire but talked his way out of jail, then fought in Ethiopia and covered Spain’s ‘Glorious Revolution’ in 1868. He arrived in Zanzibar in 1871 then marched 700 miles through tropical forest and African bush to reach the missionary David Livingstone. Upon finding Livingstone, Stanley reportedly asked, “Dr. Livingstone, I presume?” Stanley is also known for his search for the source of the Nile, his pioneering work that enabled the plundering of the Congo Basin region by King Leopold II of Belgium, and his command of the Emin Pasha Relief Expedition. In terms of exploration and discovery as defined in nineteenth-century Europe, Stanley clearly stands at the top. He was knighted in 1899.