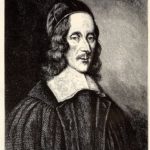 George Herbert (1593 – 1633) was a Welsh-born poet, orator, and priest of the Church of England. His poetry is associated with the writings of the metaphysical poets, and he is recognised as “one of the foremost British devotional lyricists.” He was born into an artistic and wealthy family and largely raised in England. His mother Magdalen was a patron and friend of clergyman and poet John Donne. He received a good education that led to his admission to Trinity College, Cambridge in 1609. He went there with the intention of becoming a priest, but he became the University’s Public Orator and attracted the attention of King James I. He served in the Parliament of England in 1624 and briefly in 1625.  Herbert wrote poetry in English, Latin and Greek. In 1633 all of Herbert’s English poems were published in The Temple: Sacred Poems and Private Ejaculations. After the death of King James, Herbert renewed his interest in ordination. He was noted for unfailing care for his parishioners, bringing the sacraments to them when they were ill and providing food and clothing for those in need. Henry Vaughan called him “a most glorious saint and seer”. He was never a healthy man and died of consumption at age 39.