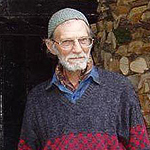 Chris Torrance (1941, E) was born in Edinburgh, grew up in London and moved to rural Wales in 1970. He left school at fifteen and worked in law for eight years, then spent five years labouring. He helped to start a small mag called Origins/Diversions, which stimulated an interest in poetry, and began writing in the mid-1960s. He soon became friendly with another young poet, Lee Harwood, whose influence was vitally important as Torrance concentrated on mainly contemporary US poetry, in particular the open field poetry of Charles Olson and cohort, the Beats and the San Francisco Renaissance. His first books were published by Ferry Press. He taught creative writing at Cardiff University for a number of years. He performs literary cabaret with the poetry and music group Poetheat, which he co-founded in 1985 with composer Chris Vine and which is now called Heat Poets. As well as the Beats, especially Gary Snyder and William Burroughs his work also has an interest in the matter and monuments of ancient Britain, including such ‘magical’ or religious phenomena as ley lines. He has also expressed an admiration for the writings of David Jones. Torrance has featured in a number of key Revival anthologies, including Children of Albion: Poetry of the Underground in Britain (1969), Conductors of Chaos (1996) and Other: British and Irish Poetry since 1970 (1999). His major work is the ongoing ‘Magic Door’ sequence, of which seven books have been published to date. A collected edition of these books was republished in 2016 as The Magic Door by Test Centre.