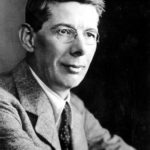 Caradoc Evans (1878 – 1945, EW), was a story writer, novelist and playwright brought up in a Welsh-speaking community in Rhydlewis, Cardiganshire. He moved to London where he worked as a draper’s apprentice and then became a journalist. He worked for The Daily Mirror from 1917 before editing T.P.’s Weekly from 1923 until the weekly folded in 1929. His first (and possibly most important) work of fiction was a series of short stories called My People, published by Andrew Melrose in 1915. It may be compared James Joyce’s Dubliners. Evans wished to shock the Welsh out of their complacency and smugness by contrasting the pieties of non-conformist Christianity with the brutal realities of poverty, meanness and hypocrisy he had personally experienced. Dylan Thomas’s early and more surreal writing is said to be influenced by Caradoc’s My People.