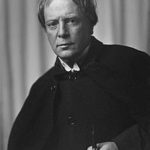 Arthur Machen (1863 – 1947, E) was born in Caerleon as Arthur Llewellyn Jones and attended Hereford Cathedral School although poverty ruled him out of university.  Writing under the pen name of Arthur Machen he is best known for his influential supernatural, fantasy, and horror fiction.  His novella ‘The Great God Pan’ (1894) has garnered a reputation as a classic of horror, with Stephen King describing it as “Maybe the best horror story in the English language.”.  He is also well known for ‘The Bowmen’, a short story that was widely read as fact, creating the legend of the Angels of Mons.  Around 1890 Machen began to publish in literary magazines, writing stories influenced by the works of Robert Louis Stevenson, some of which used gothic or fantastic themes.  He also investigated Celtic Christianity, the Holy Grail and King Arthur and concluded that the legends of the Grail were based on dim recollections of the rites of the Celtic Church.  These ideas also featured strongly in Dan Brown’s ‘The Da Vinci Code’ and George Lucas’s ‘Indiana Jones and the Last Crusade’.