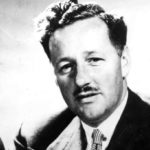 Wynford Vaughan-Thomas (1908 – 1987, EW) was born in Swansea and read Modern History at Oxford University.  In the mid 1930s he joined the BBC and in 1937 gave the Welsh-language commentary on the coronation of King George VI and Queen Elizabeth.  This was the precursor to several English-language commentaries on state occasions he was to give after the Second World War.  During the war he established his name and reputation as one of the BBC’s most distinguished war correspondents of the Second World War.  His most memorable report was from an RAF Lancaster bomber during a real bombing raid over Nazi Berlin.  Other notable reports were from Anzio, the Burgundy vineyards, Lord Haw-Haw’s broadcasting studio and the Belsen concentration camp.  ‘The Battle for Anzio’ (UK title) – a 1968 war film, an Italian and American co-production, about Operation Shingle, the 1944 Allied seaborne assault on the Italian port of Anzio in the Second World War – was adapted from his book ‘Anzio’.  The film starred Robert Mitchum and Peter Falk.  He wrote numerous books, many on the Welsh countryside.  In May 1970, when President of the Council for the Protection of Rural Wales, he officially opened the Pembrokeshire Coast Path in the Pembrokeshire Coast National Park at its southern end, at Amroth, Pembrokeshire.