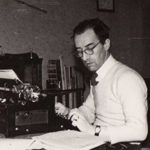 William Glynne-Jones (1907–1977, E) was born in Llanelli and worked as a steel-foundry worker for twenty years, while writing in the evenings.  He was a novelist, short story writer, broadcaster and journalist as well as being a fluent Welsh speaker.  In went to London in 1943 to earn his living as a writer.  His stories for children and adults were broadcast weekly on Children’s Hour and regularly on the mid-morning story hour by the BBC.  He wrote passionately about life in industrial South Wales in the 1920s, and amongst his circle of literary friends were: Glyn Jones, Doris Lessing, W. Somerset Maugham, George Ewart Evans, Gareth Hughes (a first cousin), Gwyn Jones, Gwyn Thomas, Dylan Thomas, Brian Forbes, Emyr Humphreys, Clifford Evans, Emlyn Williams and Richard Burton.