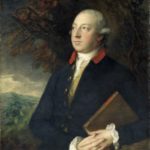 Thomas Pennant (1726 – 1798) was born in Flint and was a naturalist, traveller, writer and antiquarian. He wrote acclaimed books including ‘British Zoology’, ‘the History of Quadrupeds’, ‘Arctic Zoology’ and ‘Indian Zoology’ although he never travelled further afield than continental Europe. He knew and maintained correspondence with many of the scientific figures of his day. His books influenced the writings of Samuel Johnson. As an antiquarian, he amassed a considerable collection of art and other works, largely selected for their scientific interest. Many of these works are now housed at the National Library of Wales.