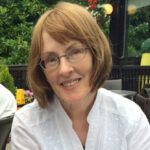 Stevie Davies is a novelist, essayist and short story writer from Swansea.  She was elected a fellow of the Royal Society of Literature in 1998. Her novel ‘The Element of Water’ was longlisted for the Booker Prize in 2001.  The only child of an RAF officer, Davies left Wales at the age of two and spent a nomadic childhood in Egypt, Germany and Scotland in the 1950s.  After studying at University of Manchester, she went on to lecture in the English department there.  Davies has published widely in the fields of fiction, literary criticism, biography and popular history. Her non-fiction work includes titles on the Brontë family, John Milton and Henry Vaughan. Davies’ first novel, ‘Boy Blue’ was published in 1987, and won the Fawcett Society Book Prize later that year.