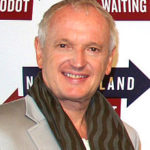 Sean Mathias (1956, E) is a theatre director, film director, writer and actor from Swansea.  He was also the former partner of Sir Ian McKellen.  His acting career began with a small role the cult BBC TV series ‘Survivors’ (1977).  He played an Irish Guards lieutenant in the film ‘A Bridge Too Far’.  Various other TV appearances followed.  Mathias has also written extensively for theatre.