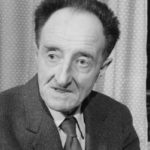 Saunders Lewis (1893 – 1985) was a poet, dramatist, historian, literary critic, and political activist. He was a prominent Welsh nationalist and a founder of Plaid Genedlaethol Cymru (the National Party of Wales), later known as Plaid Cymru. Lewis is usually acknowledged as one of the most prominent figures of 20th century Welsh-language literature. Lewis was a 1970 Nobel nominee for literature, and in 2005 was 10th in a BBC Wales poll to name Wales’s greatest-ever person. He served in WWI in France and was wounded. Upon return to the UK he graduated in English from Liverpool University and lectured Welsh at Swansea University. A complicated character Lewis gained fame with the protest, known as Tân yn Llŷn (“Fire in Llŷn”) – a UK government plan to put an RAF training camp in North Wales, against the wishes of 500,000 Welsh protestors. On 8 September 1936, the building was set on fire and in the investigations which followed Saunders Lewis, Lewis Valentine, and D. J. Williams claimed responsibility. They were tried at Caernarfon, where the jury failed to agree on a verdict. The case was then sent to be retried at the Old Bailey in London, where the “Three” were convicted, and sentenced to nine months imprisonment. On their release from Wormwood Scrubs, they were greeted as heroes by 15,000 Welsh people at a pavilion in Caernarfon. In 1970, Lewis was nominated for the Nobel Prize in Literature. His literary works include plays, poetry, novels and essays. He wrote mostly in Welsh, but he also wrote some works in English. By the time of his death in 1985 some rated him as amongst the most celebrated of Welsh writers.