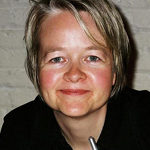 Sarah Waters (1966, E) was born in Neyland, Pembrokeshire but later moved to Middlesbrough when she was eight years old. As part of her research she read 19th-century pornography, in which she came across the title of her first book, Tipping the Velvet. However, her literary influences are also found in the popular classics of Victorian literature, such as Charles Dickens, Wilkie Collins and the Brontës. She is a best selling author best known for her novels set in Victorian society and featuring lesbian protagonists, a number of which have been adapted for TV or films.