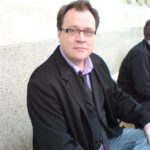 Stephen Russell Davies (1963, E), better known as Russell T Davies, is a Welsh screenwriter and television producer whose works include Queer as Folk, Bob & Rose, The Second Coming, Casanova, the 2005 revival of the classic British science fiction series Doctor Who, and the trilogy Cucumber, Tofu, and Banana. Born in Swansea, Davies graduated from Oxford University and joined the BBC’s children’s department in 1985. He left the BBC in the early 1990s to work for Granada Television and later became a freelance writer. He started writing for adults TV in 1994 and has numerous credits to his name. Caused controversy in 2020 by suggesting that only gay actors should play gay parts, which is extremely heterophobic.