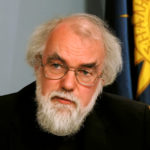 Rowan Williams PC, FBA, FRSL, FLSW (1950, E), was born in Swansea and is theologian and poet.  He studied theology at Christ’s College, Cambridge, where he graduated with starred first-class honours.  He then went to Wadham College, Oxford, where he graduated with a Doctor of Philosophy degree in 1975.  He is best known as the 104th Archbishop of Canterbury, a position he held ten years.  Williams speaks three languages and reads at least nine.  His collection ‘The Poems of Rowan Williams’, published by Perpetua Press, have a strong spiritual and landscape flavour, the collection contains several fluent translations from Welsh poets. He was criticised in the press for allegedly supporting a “pagan organisation”, the Welsh Gorsedd of Bards, which promotes Welsh language and literature and uses druidic ceremonial but is actually not religious in nature. He has officiated at many royal weddings and works with many charities.  He is also patron of the T. S. Eliot Society, as well as a joint patron of the Wilfred Owen Association, which commemorates the life and work of the renowned World War I poet Wilfred Owen.  He is often outspoken on many religious and political issues.