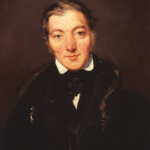 Robert Owen (1771 – 1858) was a textile manufacturer, philanthropic social reformer, and one of the founders of utopian socialism and the cooperative movement.  Owen is best known for his efforts to improve the working conditions of his factory workers and his promotion of experimental socialistic communities.  In the early 1800s Owen became wealthy as an investor and eventual manager of a large textile mill at New Lanark, Scotland. In addition to his leadership in the development of cooperatives and the trade union movement, he also supported passage of child labour laws and free, co-educational schools. Owen raised the demand for an eight-hour day in 1810, and in 1817 he had formulated the goal of the eight-hour workday and coined the slogan: “Eight hours labour, Eight hours recreation, Eight hours rest.”