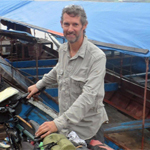 Robert Graham (1961, E) originally from Aston, Birmingham, he moved to Wales at the age of six months old. At sixteen he joined the navy, travelling the world and fighting in the Falklands War. In 2013 he left his beloved Wales in a bid to cycle to the other side of the world, pushing his body beyond the realms of physical endurance; all in his quest for adventure. He attempts to cycle 20,000 kilometres, through twenty countries in just ten months. Never one to take the easy option he rides solo and unsupported also. It’s a challenge many told him couldn’t be done.