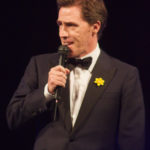 Rob Brydon (1965, E) is an actor, comedian, radio and television presenter, singer and impressionist. He was born in Baglan and educated at two independent schools: St. John’s School in Porthcawl, which Eddie Izzard also attended, and Dumbarton House School in Swansea until the age of 14. He played Bryn West in the sitcom Gavin & Stacey and Keith Barret in the BBC comedy series Marion and Geoff. He has appeared in a number of shows for the BBC with Steve Coogan, including The Trip series in 2010, released as a feature film later that year. Since 2009, Brydon has presented the BBC One comedy panel show Would I Lie to You?