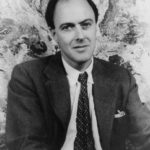 Roald Dahl (1916 – 1990, E) was an internationally renowned children’s book writer was born in Cardiff in 1916 to Norwegian parents. He was a novelist, short story writer, poet, screenwriter, and fighter pilot. His books have sold more than 250 million copies worldwide. His famous works include Charlie and the Chocolate Factory, James and the Giant Peach, The BFG (Big Friendly Giant) and Matilda, which have since been made into feature-length movies and watched by millions across the world. To honour his successes there is an annual Roald Dahl birthday party for children at the Norwegian Church in Cardiff Bay. In 2016, to mark the 100th anniversary, Cardiff was transformed into the ‘City of the Unexpected’ following a variety of events and celebrations throughout the summer.