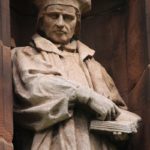 Richard Parry (1560–1623) was a Bishop of St Asaph and translator of the Bible to the Welsh language. He was born in 1560, the son of John ap Harri, from Pwllhalog, Cwm, Flintshire, and Ruthin. He was ordained a deacon in 1584, and in May was instituted to a comportion of the tithes of Llanelidan and the endowment of Ruthin Free School where he became headmaster. His brother-in-law was the lexicologist, John Davies, who assisted him and did much of the work with the revision of the Welsh Bible and Book of Common Prayer, published in 1620 and 1621.