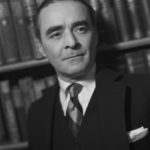 Richard Llewellyn (1906 – 1983) was born of Welsh parents in Middlesex. He lived a nomadic life, travelling widely. Before World War II, he spent periods working in hotels, wrote a play, worked as a coal miner and produced his best-known novel. During World War II, he rose to the rank of Captain in the Welsh Guards. Following the war, he worked as a journalist, covering the Nuremberg Trials, and then as a screenwriter for MGM. Late in his life, he lived in Eilat, Israel. His best-known book was How Green Was My Valley (1939), which won international acclaim and was made into a classic Hollywood film. He died in Dublin.