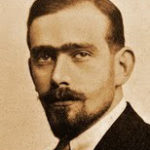 Richard Hughes (1900 – 1976) was born in Surrey but spent many years in Wales. He was employed as a journalist and travelled widely before he married the painter Frances Bazley in 1932. They settled for a period in Norfolk and then in 1934 at Castle House, Laugharne in south Wales. Dylan Thomas stayed with Hughes and wrote his book ‘Portrait of the Artist as a Young Dog’ whilst living at Castle House. He wrote only four novels, the most famous of which is ‘The Innocent Voyage’ (1929), or ‘A High Wind in Jamaica’, as Hughes renamed it. Later in life Hughes relocated to Ynys in Gwynedd and was churchwarden of Llanfihangel-y-traethau. Hughes was a Fellow of the Royal Society of Literature and, in the United States, an honorary member of both the National Institute of Arts and Letters and the American Academy of Arts and Letters.