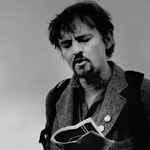 Rhys Trimble (1977, EW) is a bilingual poet, artist and musician. Born in Livingstone, Zambia he was raised in Pontypool. Trimble completed his first degree in Biochemistry in the University of Sussex (1999) and then a BA in literature and creative writing from Bangor University in 2010. He published his first book of poetry, Keinc, the same year. He also has a PhD from the University of Northumbria at Newcastle. He has authored more than 15 books of poetry in Wales, England, India and the US since 2010, including Swansea Automatic, Anatomy Mnemonics for Caged Waves (US) and Hexerisk. He also edits the experimental poetry e-zine ctrl+alt-del. since 2008.