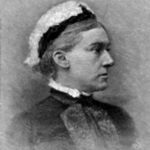 Rhoda Broughton (1840 – 1920) was a novelist and short story writer. Born in Denbigh her early novels earned her a reputation for sensationalism which caused her later and stronger work to be neglected by serious critics, though she was described as a queen of the circulating libraries. She had a reputation for creating fast heroines with easy morals. Somerset Maugham observed: “I remember Miss Broughton telling me once that when she was young people said her books were fast and when she was old they said they were slow, and it was very hard since she had written exactly the same sort of book for forty years.” She stands in the tradition of great lady novelists like Jane Austen and her work always criticised a woman’s role and position in society.