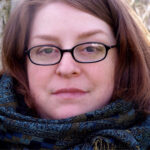 Rhiannon Hooson (1979, E) is a poet, author and editor from mid Wales.  She has won major awards for her work, including an Eric Gregory award from the Society of Authors and has performed at literature festivals and venues across the UK, including the Hay Festival, where she was in residence as a Writer at Work in 2019.  Her work has been featured in The Guardian and Magma among others.  Her debut poetry collection, ‘The Other City’ was released in 2016.  In 2018 she became the poetry editor for Creative Countryside magazine.