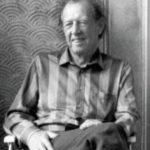 Raymond Williams (1921 – 1988) was a Marxist theorist, academic, novelist and critic. He was an influential figure within the New Left and in wider culture. His writings on politics, culture, the mass media and literature made a significant contribution to the Marxist critique of culture and the arts. Some 750,000 copies of his books have sold in UK editions alone and there are many translations available. Williams went to Trinity College Cambridge where he joined the Communist Party. He enlisted in 1940 and served as an officer in the Anti-Tank Regiment of the Guards Armoured Division in 1941–1945, being sent into the early fighting in the Invasion of Normandy after the Normandy Landings (D-Day). He commanded a unit of four tanks and mentions losing touch with two of them during fighting against Waffen-SS Panzer forces in the Bocage; he never discovered what happened to them, due to a withdrawal of the troops. He was part of the fighting from Normandy in 1944 through Belgium and the Netherlands to Germany in 1945, where he was involved in the liberation of one of the smaller Nazi concentration camps.