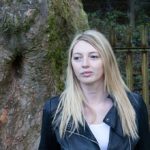 Rachel Tresize (1970, E) is from Cwmparc, Treorchy. Her first novel, In and Out of the Goldfish Bowl, was published in 2002 while she was still a student. It received broad critical acclaim, and saw her named as a ‘new face of literature’ by Harpers & Queen in 2003. Trezise’s second book, Fresh Apples, was a wry, gritty collection of short fiction describing life in the mining valleys of south Wales. Published in 2005, it won the inaugural Dylan Thomas Prize for writers under 30. Trezise grew up listening to rock music in the late 1980s, and held a long ambition to write a rockumentary. In 2007, she published Dial M for Merthyr, her account of her time spent on tour with Welsh rock band Midasuno.