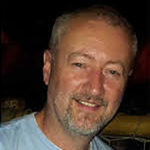 Nigel Williams (1960, E) is from Abercrave in the Swansea Valley.  A former police officer, he has served in Brixton as well as south Wales.  As an armed V.I.P and Special Escort Group driver he was involved in many of the Royal visits to the Principality.  His police service was cut short in 1994 when he was hit by a stolen car and fractured his spine.  He was forced to retire but was awarded seven commendations during his service with the Welsh force.  He returned to education and achieved a first-class honours degree in fine art.  This was followed by a teaching qualification at Cardiff University and a Master’s degree in fine art.  He began writing in 2009 and has written nineteen novels since – mainly crime – and several screenplays.  He has ghost-written a successful novel and currently writes solo projects and collaborates on a popular crime series based in Wales.  His first full length novel is ‘Eden Relics’ (2012).