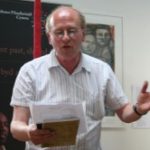 Mike Jenkins (born 1953, E) is a poet, story writer and novelist. He is also the father of Plaid Cymru politician Bethan Jenkins and journalist Ciaran Jenkins. A former editor of Poetry Wales and a long-term co-editor of Red Poets. He has won many awards and has judged the Welsh Poetry Competition on two occasions. Famous for his lively readings and writing workshops Mike frequently appears on radio and television and is known among Cardiff City football fans as the club’s unofficial poet.